Have you ever tried to push yourself in a manual wheelchair? Did you know that the energy required to propel the chair forward (mechanical efficiency) is less than ten percent effective? How would you design a wheelchair that is easier and more efficient to move? The following is a summary of a mobility study that evaluated the mechanical efficiency of two types of lever-operated wheelchairs and then compared the results with those of a conventional hand rim wheelchair.

What is a lever-propelled wheelchair?

In addition to hand rims, lever-propelled wheelchairs are equipped with levers to control velocity. Studies have shown that levers are better than hand rims because they require lower energy expenditure. 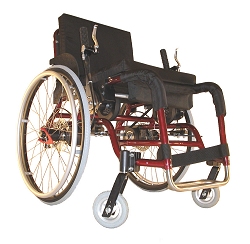 The Willgo features two levers that are installed in front of each wheel. Pushing the levers forward engages a spring system that generates propulsion. The levers need to be retracted manually. The Willgo system can be installed on any wheelchair that meets the manufacturer’s specifications. Click for more information. 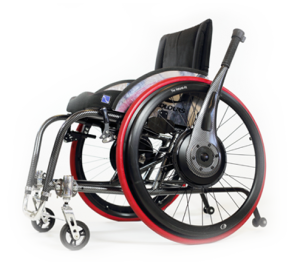 The Wijit features two levers that are built into the hub of each wheel. Pushing the levers forward engages a roller system that generates propulsion. The levers retract automatically. The Wijit roller system is manufactured as part of the wheelchair. Click for more information.

The researchers of this study measured energy expenditure, and heart and lung response while participants used either the Willgo or the Wijit. The wheelchair was mounted on a treadmill and connected by a cable to measure the drag force. Participants wore a ventilator and were connected to heart-monitoring equipment to gather cardiopulmonary data.

The researchers recruited ten healthy, able-bodied adult males with no prior manual wheelchair experience. Before beginning each trial, the participants learned how to operate the respective wheelchair on the ground and on a treadmill. They participated in two sessions that occurred on different days. The condition was randomly selected from one of the following four scenarios:

The research revealed some interesting details:

The researchers investigated only two aspects of lever system design: mechanical efficiency and cardiopulmonary response. They did not measure joint movement, steering, comfort, safety and related personal and biomechanical factors.

Other differences between the Wijit and the Willgo that were not evaluated include: