The Collaboration on Repair Discoveries — CORD — was founded  in 1995 by Dr. John Steeves with the support of Rick Hansen and then-UBC President Dr. David Strangway. That year, the Rick Hansen Man-in-Motion Chair in Spinal Cord Research was created, and a search was initiated for the first chair holder. Dr. Wolfram Tetzlaff was the successful candidate, joining Dr. Steeves and a small group of researchers with an interest in spinal cord injury.  Membership in CORD grew steadily, reaching 15 members in 2000. 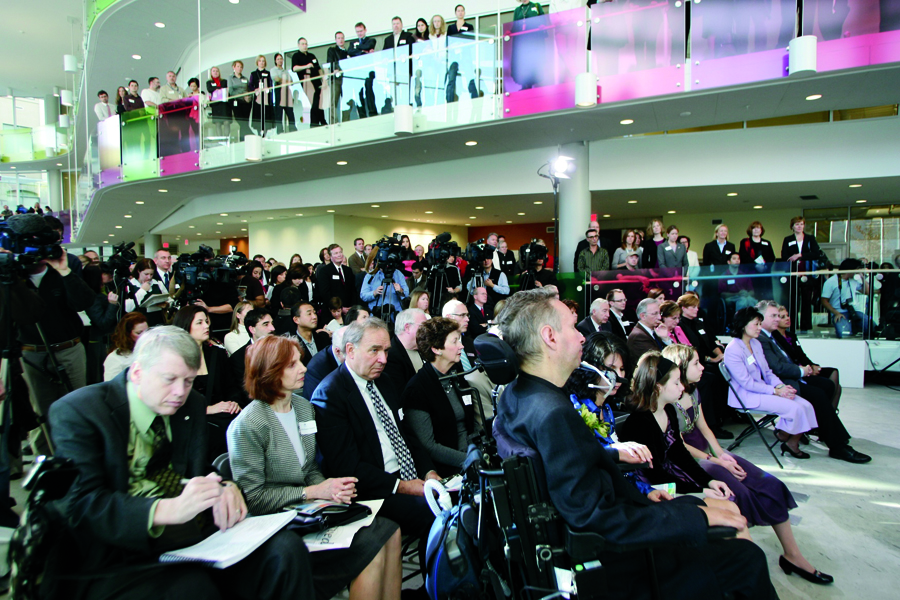 In 2002, Dr. Steeves and his CORD colleagues were awarded a Canada Foundation for Innovation infrastructure award of $12.8 million. This award was soon matched by the British Columbia Knowledge Development Fund, and additional funding was pledged by UBC, Vancouver Coastal Health, and the Rick Hansen Foundation, to provide for the construction of a dedicated SCI research centre.

CORD’s vision and mandate became much broader than a regional research centre, and the research group was renamed ICORD–with the “I”  representing a new “international” capability.

At that time, ICORD’s administrative offices and some basic science research laboratories were still located in the Biosciences Building of the main UBC campus. Other ICORD researchers were also based at more than twenty different locations in Metro Vancouver and Vancouver Island. However, with the opening of the Blusson Spinal Cord Centre in November, 2008, many of ICORD’s multidisciplinary researchers are together under one roof where they can work closely with one another, and with people living with spinal cord injuries. This has accelerated the discovery, development, and validation of therapies and practices to promote full functional recovery and improved quality of life.

The building is named after Dr. Stewart and Mrs. Marilyn Blusson in recognition of their generous donation to the Rick Hansen Foundation in support of this new building, which also houses VCH’s Brenda and David McLean Integrated Spine Clinic, and the Rick Hansen Institute.