The Faculty of Medicine received a total of $31.2 million for eight projects in the latest round of Canada Foundation for Innovation (CFI) funding, announced today at the Djavad Mowafaghian Centre for Brain Health (DMCBH). These projects represent the majority of the 15 grants, totaling $52.2 million, awarded to UBC. Two of these were awarded to ICORD members.

“Hearing about the scientists and researchers here at the University of British Columbia is truly inspiring,” said federal Minister of Justice and Attorney General of Canada Jody Wilson-Raybould, who made the announcement. “The projects that feature physics, health research, robotics and address various health conditions are examples of what Canadians can achieve when given the proper tools to excel. I am proud that our government can support such ground-breaking research, and I truly look forward to a future where our scientists will help to make Canada the best it can be.”

“The Innovation Fund provides UBC researchers with critical funding for the space and equipment they need to advance research,” said Gail Murphy, UBC’s Vice-President, Research and Innovation. “We thank the Canada Foundation for Innovation and the Government of Canada for their ongoing support.” 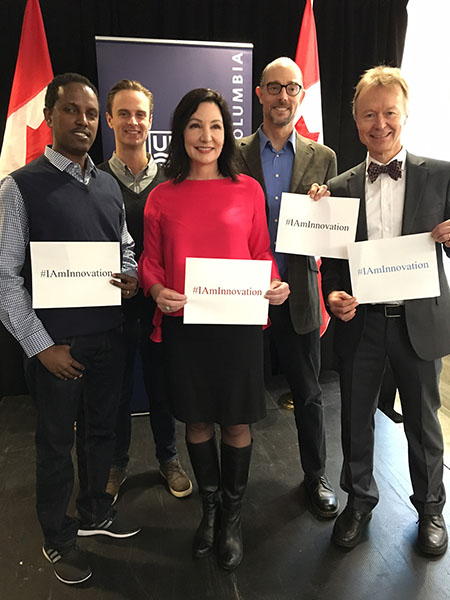 “The Innovation Fund is enabling me to bring new technologies to UBC to help see how the brain changes after concussion,” said Dr. Cheryl Wellington. “This is a crucial step for accurate diagnosis and to evaluate new treatment options.”

ICORD Director Dr. Wolfram Tezlaff along with colleagues Drs. Peter Cripton, Brian MacVicar, Piotr Kozlowski, John Kramer, Andrei Krassioukov, Brian Kwon, Tom Oxland, and Chris West, received $1.6 million to refine techniques for modelling and analyzing spinal cord injury. The project will develop the next generation of equipment to study fracture-dislocation injuries in experimental models, thus providing more clinically-relevant examples of the stresses on the spinal cord and the resulting tissue damage — essential information for the development of treatments and design of clinical trials to test treatments in humans. The researchers will use such models to search for biomarkers in cerebrospinal fluid, to conduct optical sectioning and three-dimintion modelling to better examine healthy and damaged tissue, and to evaluate motor, cardiovascular, urological, and sensory outcome parameters in animals.

“On behalf of my team and ICORD, I’d like to thank the CFI for this funding,” said Dr. Tetzlaff. “We’re immensely grateful for their continued support. We’re also grateful for the ongoing support of the Blusson Integrated Cures Partnership. Thanks to funding for the translational platform project from the BICP, we were able to generate pilot data which was instrumental to the success of this application to the CFI.”

ABOUT THE INNOVATION FUND

The Innovation Fund supports initiatives that allow universities, colleges and research hospitals and their students to build on existing areas of expertise such as artificial intelligence, quantum science, brain health, and renewable energy. This fund aims to put the right tools in the hands of the country’s scientists so they can discover, innovate and train their students for the jobs of tomorrow. By doing so, scientists are contributing to building a bolder, brighter future for all Canadians, one that includes a strong and healthy middle class.