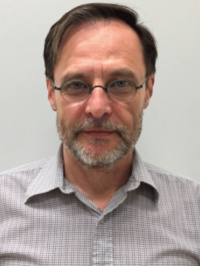 Dr. Kozlowski’s research uses magnetic resonance imaging (MRI) based techniques to study SCI. He has worked on the development of a non-invasive technique for monitoring changes in myelin in the spinal cord following injury. Myelin in the brain and spinal cord helps neurons function more efficiently by wrapping around them, but it also inhibits healing when the neurons are injured. Studying how myelin changes after an injury may shed light on how to improve healing. Dr. Kozlowski also applies MRI and magnetic resonance spectroscopy technology to his prostate cancer research—his group has developed a novel MRI-based technique for diagnosing prostate cancer.

Dr. Kozlowski is an Associate Professor in the Departments of Radiology and Urologic Sciences at the University of British Columbia. He is a Principal Investigator at ICORD and Associate Director of the UBC Magnetic Resonance Imaging Research Centre. He is also an Associate Member of the Department of Physics and Astronomy at the University of British Columbia and a Research Scientist at the Vancouver Prostate Centre. Dr. Kozlowski obtained his M.Sc. at the Jagiellonian University and his Ph.D. at the Institute of Nuclear Physics in Krakow, Poland.

The technology that Dr. Kozlowski is developing can translate into improved models for research by allowing real-life assessment of new regeneration therapies. It can also further our understanding of the basic biology behind SCI.

Dr. Kozlowski values working at ICORD because of its excellent research environment. He is excited to have access to so many experts in the field of SCI research.

Dr. Kozlowski’s initial interest in physics was in the area of theoretical astrophysics and general theory of relativity. However, he quickly realized that working in an area closer to everyday life was more suitable for his future career, so he joined a group of physicists at the Institute of Nuclear Physics in Krakow, where he helped build the first research MRI scanner in Eastern Europe.

Dr. Kozlowski has been working with Dr. Wolfram Tetzlaff since 2004 on multiple projects including MRI techniques for studying white matter in the brain.

He has also worked with Dr. Tom Oxland on MRI techniques to recognize clinically relevant models of injury.

With Dr. Andrei Krassioukov, he has examined fat content in pre-SCI models and how this affects injury.

In his work on prostate cancer, Dr. Kozlowski developed a diagnostic tool which combines two MRI techniques in order to detect tumours with greater sensitivity. He also determined that using MRI to detect a particular organic compound called EF5 is not suitable for assessing oxygen loss in prostate tumours. This helped clarify useful diagnostic techniques for detecting prostate cancer.

For more of Dr. Kozlowski’s major findings, please see the selected publications below, as well as his recent publications listed at the bottom of the page: