This is the lay summary written on the paper “Acute physiological comparison of sub-maximal exercise on a novel adapted rowing machine and arm crank ergometry in people with a spinal cord injury” Sawatzky, B., Herrington, B., Choi, K., Mortenson, B., W., Borisoff, J., Sparrey, C., & Laskin, J. J. (2022). Read the original article here. 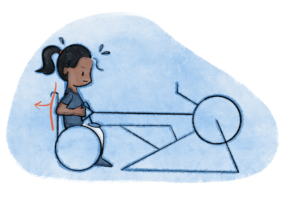 Illustration based on Figure 1 in original research article

The goal of this study was to test and compare oxygen uptake (VO2) during exercise using the adapted rowing machine and the arm cycle in people with spinal cord injury/disease (SCI/D). VO2 during aerobic exercise reflects a person’s ability to take in and use the oxygen in active muscles and other tissues to keep moving. Greater VO2 values can be thought of as more intense exercise challenging one’s heart, lungs, and metabolism.

How was the study done?

The rowing machine used in this study was adapted from a Concept2 Indoor Rower, and could fit manual or power wheelchairs. It had an adjustable frame with support pads, one over the thighs and one in front of the chest. The chest support was optional to accommodate different levels of trunk stability. 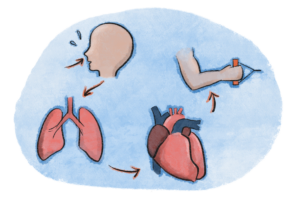 14 adults with SCI/D with varying levels of trunk stability participated in this study. After an orientation session, participants were tested on the arm cycle and the adapted rowing machine on two separate days. On each day, participants began with a warm-up/practice on the selected machine, and exercised for 5 minutes each at self-selected low and moderate workloads. Metabolic data, such as VO2 and heart rate, and perceived physical exertion (how hard you feel like your body is working), were recorded during the exercise.

What were the results of this study?

The main findings of this study were that: 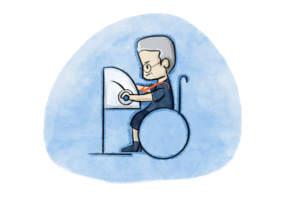 What does this mean for the SCI community?