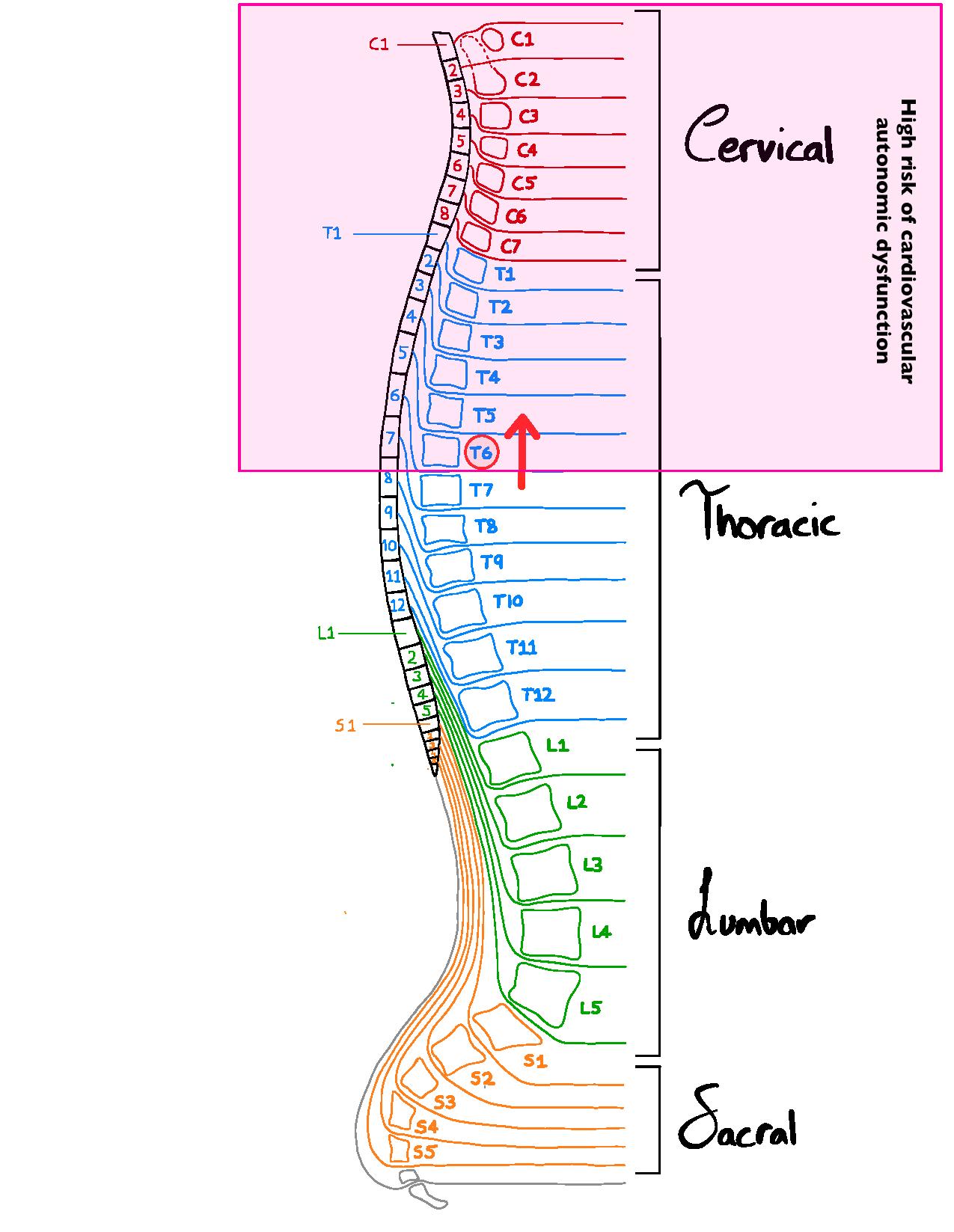 Our spinal nerves, depicted in the image on the right, innervate various organs/organ systems to modify their function. Autonomic nerves called sympathetic nerves that exit the spinal cord above T6 innervate both the heart, influencing the rate and force of the heartbeat, as well as the blood vessels, which are important in controlling blood pressure. This cardiovascular autonomic modulation of the cardiovascular system is critical for normal control of the circulation, and is important during “fight or flight” situations, known as sympathetic stimulation.

Spinal cord injuries (SCI) that affect spinal levels above T6 can severely disrupt the capacity to regulate heart rate and blood pressure, leading to cardiovascular autonomic dysfunction. This can cause problems with adjusting blood pressure and heart rate during position changes, a condition known as orthostatic hypotension (a drop in blood pressure when moving from lying to upright positions), that can lead to fatigue, and dizziness or fainting. Other problems can include an inability to increase heart rate and blood pressure during exercise, creating challenges with activities of daily living, as well as a condition of extremely high blood pressure, known as autonomic dysreflexia, that can be triggered by many different daily activities, such as a full bladder or bowel or conducting personal care routines. Individuals can also experience cardiac arrhythmias, which is defined as abnormal electrical activity in the heart.

This study’s main goal is to:

How was this study conducted?

The data in this study was collected upon 5 different visits in the following order:

Measurements from this study were compared with previous research on chronic SCI, as well as able-bodied controls in order to gain a comparison and better understanding of the effects of injury to cardiovascular autonomic control in the acute phase of SCI.

What are the findings of this study?

Individuals with autonomically-complete lesions, meaning those with severe injury to the spinal cardiovascular autonomic pathways, could be readily identified using the new approach of measuring LF-SAP. Those with severe autonomic injuries lost fine tuning of blood pressure and so had low levels of LF SAP that did not improve over time. These analyses were best performed at 1-month after injury and did not reliably detect autonomic impairment before this timepoint. Cardiovascular symptoms were common and worsened with time, particularly in those with severe injuries to cardiovascular autonomic nerves. Baroreflex and cardiorespiratory regulation were also impaired after SCI, and there was an increased risk for irregular heart beats that was present immediately after injury and did not improve over the first year.

Overall, the researchers in this study were able to quantitatively measure the extent and impact of autonomic dysfunction in individuals with SCI by performing a simple continuous blood pressure measurement. This is clinically advantageous in many ways as it allows doctors, researchers and clinicians to better classify the presence, symptoms and signs of autonomic dysfunction after SCI without the need for arduous autonomic function tests or relying simply on symptom reports.

Why are the findings important for the SCI community?