Dirk Haupt is a masters student at UBC. For the final project of his Biomedical Engineering 554 class, he worked on a project to design a virtual environment to investigate how people with SCI perceive and use their hands in virtual reality. This is a summary of his project, which he did under the supervision of ICORD researchers Drs. Jaimie Borisoff and John Kramer. 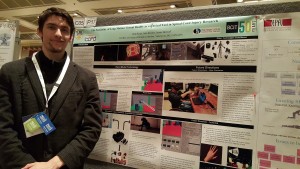 Dirk at the Praxis Conference, April 2016

The Oculus Rift is a Virtual Reality (VR) head-mounted display that lets a user see and interact within a virtual environment. The Leap Motion (LM) controller is a small peripheral that uses 2 infrared cameras to track a user’s hand movements at high enough resolutions to discern individual finger gestures. Our goal is to build a VR environment using the Oculus Rift to examine body representation and sensorimotor function after spinal cord injury (SCI). We are specifically interested in learning how individuals with SCI can assume ownership over VR arms and legs, and how characteristics of injury associated with perception and movement affect immersion in VR. VR has shown potential as a rehabilitation aid and the LM has been used to track hand tremors. Yet the specifics of hand motion, especially in people with limited hand function, has not been explored with VR.

We were therefore interested in assessing whether we could create a VR environment that: 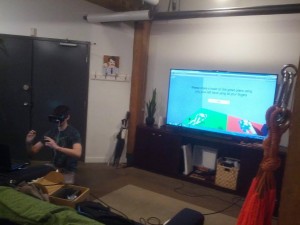 Presenting the app and concept for feedback to Virtual Hand, a Vancouver – San Francisco meetup group for Virtual Reality professionals

Since the LM captures hand motion without any biometric input (no muscle tension information, only visual), it cannot accurately detect pinch or grab strength above some threshold. Since a microfilament touching the virtual hand will likely not elicit any sensation we have broadly mimicked only two items of prehension as done in GRASSP: grab and Cylindrical grasp and Tripod pinch. In our preliminary environment, virtual objects (representing bottles/pegboards) can be grabbed/pinched by the user and need to be assembled as a tower to broadly mimic the dexterity needed for a cup pour/peg placement. The program therefore has a pinch mode where objects can only be picked up when the index finger and the thumb are near each other which is registered as a pinch. In grab mode, all four fingers (and optionally the thumb) must make contact with an object for it to be picked up. In each tower assembly trial, there is an optional time limit that can be imposed.