What are red blood cells (RBC) and how are they related to cardiorespiratory fitness (CRF)?

RBC’s carry oxygen around the body. If there is not enough oxygen circulating to the brain and heart, it can lead to severe complications or fatality. RBC’s oxygen-carrying capacity is, therefore, a very important component of CRF.

CRF is the maximum capacity of the cardiovascular, respiratory and muscular systems to transport oxygen during prolonged physical activity. For individuals with SCI, factors affecting CRF can include, but are not limited to: autonomic

nervous system dysfunction, as well as impairments to the motor system which alters muscle mass recruitment. These factors can alter the volume of blood returned to and then subsequently pumped from the heart, which is one of the key limiting factors for CRF. The level of SCI can affect CRF, where individuals with lower level injuries tend to have a higher physical capacity.

What is red blood cell distribution width (RDW) and why is it important?

Because the cardiovascular system is a key factor for oxygen transportation in the body, any impairment to this system caused by cardiovascular disease (CVD) can reduce CRF significantly. Individuals with spinal cord injuries (SCI) experience higher risks of CVD, which cannot always be explained by the traditional CVD risk factors (e.g. hypertension, smoking, diabetes mellitus). In able-bodied individuals, elevated RDW is associated with low CRF compared to those with normal RDW levels. However, the association between RDW and CRF had not previously been described in individuals with SCI.

There were two main purposes of this study:

How was the research conducted?

In order to examine RDW differences, as well as the relationship between RDW and CRF, researchers had participants perform a graded upper-body arm-crank exercise test until exhaustion. This determined the maximal oxygen uptake of participants. The researchers also measured RDW using an automated hematology system.

What are the findings? 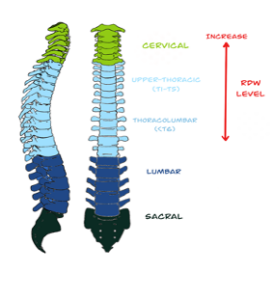 Participants with cervical SCI demonstrated higher levels of RDW compared to those with upper-thoracic and thoracolumbar spinal injuries. This difference in RDW level is likely due to altered immune function possibly caused by factors such as autonomic impairments, altered body composition, and reduced levels of physical activity. The spleen makes up an important part of the body’s regulation of immune function by acting as a filter for blood; a disruption of the sympathetic innervation to this organ as is the case with higher-level SCI, possibly alters the spleen’s ability to generate an anti-inflammatory response.

This study also observed an inverse association between RDW levels and cardiovascular fitness in individuals with SCI. These findings encourage the need to maintain or improve CRF following SCI to optimize health.

Limitations of this study:

Autonomic System: Part of the nervous system that regulates involuntary functions of the body. It is made up of the sympathetic and parasympathetic nervous systems which prepare individuals for periods of stress and relaxation/digestion, respectively.

Automated hematology system: generates red blood cell distribution curves that provide a measurement for RDW. Based on this, RDW ranges can be calculated

Sympathetic Innervation: Stimulation of nerves from the sympathetic nervous system. Sympathetic innervation is supplied by spinal segments T1 to L3 of the thoracolumbar spinal cord.