You use crutches to increase your ability to get around when you have broken a leg or if you have neurological or muscle problems. As the design and production of crutches have advanced, two types of crutches have evolved: underarm crutches and forearm crutches. And while crutch research lags behind that of wheelchairs, statistics indicate that overuse of either type can lead to problems with nerves, muscles, and arteries and even to bone fractures within the arm. These problems are triggered by putting weight through areas that are not well naturally padded and thus injure the nerves and vessels from the repetitive nature of walking.

An innovation recently became available on forearm crutches that sought to absorb some of this weight or force generated each time you take a step. The crutch is manufactured with a damper system located under the handle. A force-absorbing polymer is inside the shaft of the crutch (see Figure). 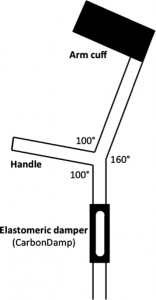 The focus of this research was to determine the influence of the damper system on the forces created when the crutches are loaded while walking with these crutches using a “swing through gait”. Researchers thought that the damper system would lessen the impact while walking. This would result in smaller vertical forces and impulses (i.e. force over time) than compared to a similar crutch without a damper system and one that was a generic rigid forearm crutch.

Who took part in the study?

Of these 10 were right-handed, two were left-handed and one was ambidextrous.

How were participants tested?

Participants were fitted with three sets of crutches based on standard guidelines. Participants were taught how to use the crutches to perform appropriate swing through gait. They then were instructed to practice with each set for approximately 15 minutes along the walkway.

They were then asked to walk along a 6 m. walkway with hidden force plates in the floor, using a swing through gait at a their own self-selected speed. These plates were located to measure reaction forces when the tip of the crutch was on the plate. The three crutches were tested in a random order. Five trials for each crutch type were collected.

How was the data collected and analyzed?

Computer software was used to gather data from the set of force plates from landing to take-off. Force measurements were calculated normalized to the participant’s weight and then averaged across the 5 trials for each crutch type. The peak force, impulse and the time spent on the ground were also calculated. Sides were compared to see if there was any effect of hand dominance. Walking speed was also compared between crutch types.

What did they find and what does this mean?