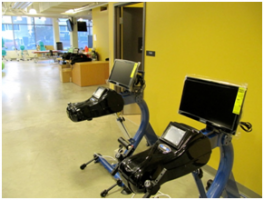 Think video games are just for kids? Think again! Researchers in Italy first theorized that video games promoting activity might benefit adults with SCI. Prior research had established that activity-promoting video games increased the use of energy in an able-bodied population, both adults and children. However, it was not known if active practice with a video game such as active Wii games might provide a similar outcome in those with spinal cord injuries (SCI).

Playing video games that promote activity—like bowling, tennis and boxing—is good for everyone, including people with SCI. The study’s results indicated that energy use (both metabolic and functional) increased significantly when practicing these video games. One hour of active video gaming can increase daily energy expended by about 6% for bowling, 10% for bowling and 15% for boxing.

Participants in the study were men from 26 to 55 years of age, with SCI lesion levels ranging from C7 to L1. Playing these games virtually has benefits above “real” bowling, playing tennis, and boxing. An active video game is relatively safe, can be carried out in the home no matter the time or weather, and protects from some nervous system effects such as abnormal heart rates, sweating and digestion.

After being hooked up to an oxygen analysis system, participants were instructed to rest ten minutes before playing the three video games in random order. They then played the video game for ten minutes and rested five minutes between each game, for cardiovascular recovery. For each sport, they started off at a beginner’s skill level and progressed in levels as they gained points. They bowled ten lanes, played a five-game match of tennis, and boxed three rounds. Bowling was self-paced; tennis and boxing were externally paced with console opponents. This approach is recommended for anyone intending to become involved in active video games, although the oxygen analysis system would of course be optional!

Researchers at the University of British Columbia and ICORD are currently looking for subjects to participate in a pilot study exploring the benefits of accessible fitness resources and education on the endurance of individuals with SCI living in the community. People who have had a spinal cord injury for over a year can take part in an eight-week beginners’ exercise program at the ICORD accessible fitness centre. Participants may also be randomly selected to use a  Nintendo Wii at home. Assessments will include an interview, a short aerobic wheeling test, and questionnaires. For more information, see: http://icord.org/
studies/2013/04/functional-fitness-participation/.