This is a summary of a paper published by a research group from Kentucky, USA in the journal The Lancet.

A recent case study published in the Lancet1 has been receiving significant attention from the media.  In Louisville, Kentucky, a young man paralyzed from the chest down received intensive rehabilitation in combination with a surgical implant above his spinal cord. The implant is designed to deliver electrical stimulation to the spinal cord below the injury. It is specifically directed at the area controlling his legs, but overlaps with regions associated with control of bladder, bowel, and sexual function.

During rehabilitation sessions before receiving the implant, the young man relied upon the assistance of his therapists to stand and to step. For him to succeed previously, the therapists held his joints in place (Fig 1), supported his body-weight, and manually moved his legs through stepping motions.

Once the electrical stimulator was implanted and activated, the young man’s own arms were enough to move him from sitting to a standing position, and he was able to remain standing for minutes at a time without help, although stepping proved too difficult — sensationalistic headlines to the contrary.

When the electrical stimulator was turned on, the young man could move his legs on command. While electrical stimulators have been used before in people with spinal cord injury, this is likely to be the best-documented instance of an individual regaining some voluntary movement after paralysis.

What are some things we need to consider?

As the authors remind us in the title, this is a case study: a report on one single individual with a unique spinal cord injury. Every injury is different, and we must wait to see whether this treatment works for other people. It is exciting and inspires much hope; however, like an early victory in a sports tournament there is much work still to be done.

It is also important to note that only leg muscles and movement were measured objectively. The subject also reported improved bladder, bowel, and sexual function after the implantation surgery, but there was no objective measurement of these improvements. Although they were of course extremely important to the individual, the assessment of their improvement was based only on his impression, and was not included as an objective finding.

What does this mean for people with SCI?

This means that even when no movement can be detected, some connections through the site of spinal cord injury may still exist. If we can find a way to provide amplification or “turn up the gain” for the nervous system, through electrical or other stimulation, we may be better able to harness those connections in the future. This study provides proof of this principle. 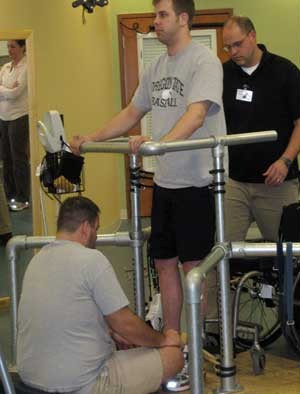 Figure 1: The subject stands with the help of his therapist 2