On February 11, 2019, the International Day of Women and Girls in Science, the L’Oréal Foundation and UNESCO announced the 21st International Award For Women in Science, which honours outstanding women scientists from all over the world. These exceptional women are recognised for the excellence of their research in the fields of material science, mathematics and computer science. Their achievements will be celebrated alongside those of 15 promising young women scientists from across the world, including ICORD postdoctoral fellow Dr. Jacquelyn Cragg, at an awards ceremony on March 14 at UNESCO’s headquarters in Paris. 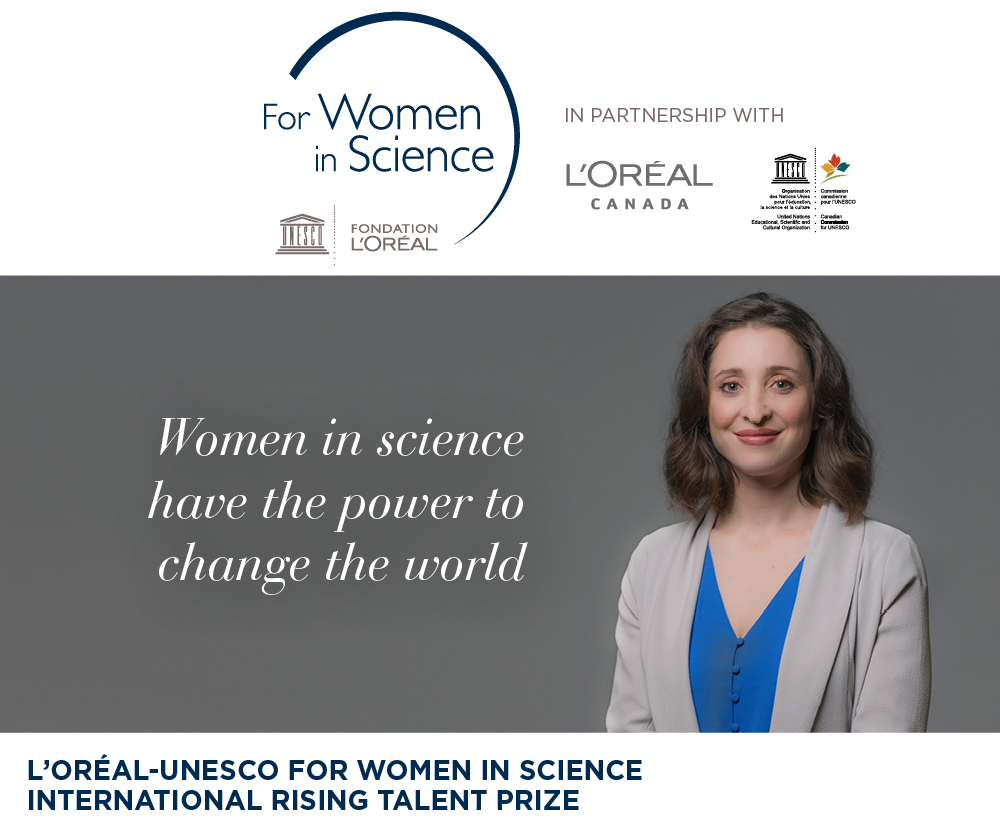 The global burden of neurological diseases has grown substantially over the past 25 years, as the world population expands and ages. Dr. Cragg, a postdoctoral fellow with Drs. John Kramer and Wolfram Tetzlaff, is using statistical algorithms to better understand the progression of such diseases, including Parkinson’s disease, amyotrophic lateral sclerosis (ALS) and spinal cord injury. She is leveraging clinical and population “big data” sources and machine-based learning to identify novel, reliable predictors of disease progression, and understand how diverse factors interact to predict long-term outcomes. She aims to be a world leader in neuro-analytics, helping to uncover innovative treatment strategies and therapies for people suffering with neurological diseases.

“Growing up, I had great teachers whose dedication and willingness to answer my questions allowed me to pursue my passion for mathematics and biology,” she says. Encouraged by teachers to enter mathematics competitions, explore lateral thinking at “Challenge Camps” and attend science fairs, Dr. Cragg developed a strong knowledge of math, statistics and science, creating a robust foundation for her future career. She continued to benefit from supportive mentors at ICORD in Vancouver, Harvard University, and Balgrist University Hospital in Zurich.

Dr. Cragg perceives major challenges for women in science. Despite the evidence that men and women have the same inherent scientific ability, she believes there are clear differences in the way that raw ability is nurtured over time, with distinct gender biases creeping in. “Overcoming gender stereotypes and encouraging girls to grow their interest in science should start from an early age,” she concludes. “Girls and boys must know that everyone can do the same things.”

Dr. Cragg’s research is supported by the Branco Weiss Fellowship – Society in Science, the Michael Smith Foundation for Health Research, the Michael J. Fox Foundation, and the Canadian Institutes of Health Research. She is the third Canadian to be recognized by L’Oréal-UNESCO as an International Young Rising Talent, alongside DR. Vanessa D’Costa (2015) and Dr. Lorina Naci (2017). She also follows in the footsteps of three Canadian Laureates for North America, recognized for their exceptional careers: Dr. Eugenia Kumacheva (2009), Dr. Molly Shoichet (2015) and Dr. Janet Rossant (2018).

ABOUT FOR WOMEN IN SCIENCE

In the domain of scientific research, the glass ceiling is still a reality: only 29% of researchers are women, 11% of senior academic roles are held by women, and only 3% of Nobel Prizes for science have been awarded to women. Since 1998, the L’Oréal Foundation, in partnership with UNESCO, has worked to improve the representation of women in scientific careers, remaining strong in our conviction that the world needs science, and science needs women. In its first 21 years, the For Women in Science program supported and raised the profile of 107 laureates and more than 3,000 talented young scientists, both doctoral and post-doctoral candidates, providing research fellowships, allocated annually in 117 countries.

ICORD is a world leading health research centre focused on spinal cord injury. From the lab-based cellular level of understanding injury to rehabilitation and recovery, our researchers are dedicated to the development and translation of more effective strategies to promote prevention, functional recovery, and improved quality of life after spinal cord injury. Located at Vancouver General Hospital in the Blusson Spinal Cord Centre, ICORD is supported by UBC Faculties of Medicine and Science, and Vancouver Coastal Health Research Institute.