We all know that exercise is good for you, but how can you find out how much you should get? And what if you have a spinal cord injury?

In November, ICORD PI Dr. Kathleen Martin Ginis and her research team published the first-ever evidence-based exercise guidelines tailored specifically to people with SCI. This research filled a knowledge gap that had existed for far too long.

“The WHO guidelines were never specifically tailored for people with SCI,” Dr. Martin Ginis says. “Not only were people with SCI essentially excluded from the systematic reviews that underpinned these specific physical activity guidelines for the general population, but the potential risks to the SCI population—including upper body overuse, skin breakdown, autonomic dysreflexia, and overheating—were not considered.” 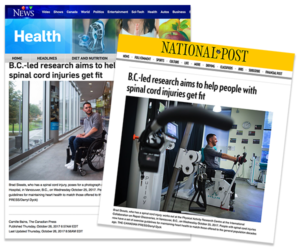 This study was featured by local and national media in November.

Building on more than 200 previous studies, the new guidelines take all these factors – and many more, from cardiovascular fitness to bone health – into consideration, recommending twenty to thirty minutes of moderate to vigorous aerobic exercise two to three times per week for adults with SCI, along with strengthening exercises for major muscle groups twice per week.

“This is a significant step toward increasing exercise activity rates in a segment of the population that faces tremendous barriers to exercise participation,” says Martin Ginis. “The SCI exercise guidelines are underpinned by a review of every published SCI study on the effects of exercise on fitness and cardiometabolic health. We are now able to say that these two specific doses of exercise can have significant fitness and cardiometabolic health benefits for adults with SCI.”

This study was published in Spinal Cord, the official journal of the International Spinal Cord Society. It was partially funded by the Rick Hansen Institute.