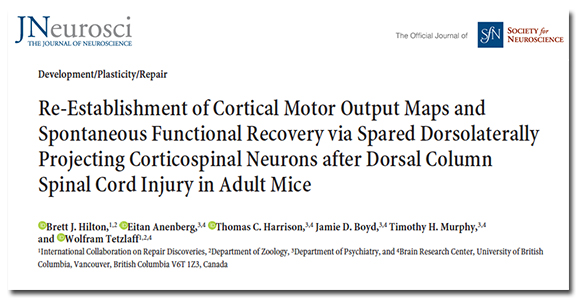 The study, published today in the prestigious Journal of Neuroscience, clearly demonstrates that even a very small number of uninjured nerve cells in the spinal cord can take over the function of nerve cells damaged by SCI. Scientists have long suspected that this happens after SCI, but it hasn’t been conclusively proven until this study.

Muscles and movement are controlled by nerve cells in the brain that project to the spinal cord. After SCI, these nerve cells are damaged, leading to paralysis. However, in some individuals with SCI, spontaneous recovery of motor function can occur. How this recovery occurs is poorly understood, but understanding it better could provide new targets for therapy.

Brett Hilton, a PhD student with ICORD Director and UBC professor Dr. Wolfram Tetzlaff, investigated the role of a specific nerve pathway, called the dorsolateral corticospinal tract, in bringing about spontaneous recovery following SCI. Using rodent models, they demonstrated that while this pathway has a relatively minor role in uninjured or healthy adults, it is able to substantiate significant recovery after a partial SCI that spares this tract.

Their study involved training adult mice to perform a task which requires them to accurately place their paws on rungs of a horizontal ladder (this is known as the “horizontal ladder task”). After SCI, the mice made more mistakes performing this task, but eventually recovered about half of their accuracy. Then, a genetic technique was used to block out the function of the dorsolateral corticospinal tract in both injured and uninjured mice. In uninjured mice, this resulted in a small change in horizontal ladder task performance. But in injured mice, well after injury had occurred, blocking out the function of this tract resulted in a significant change in task performance and the re-appearance of the errors that occurred early after injury. This provides very significant evidence that this minor pathway had taken over more function following SCI.

“The most exciting thing about this project is that we have clearly demonstrated that an uninjured pathway takes over some motor function following spinal cord injury,” said Hilton, who worked on this project as part of his thesis. “This has long been hypothesized, but very direct evidence has been lacking.”

Dr. Tetzlaff believes that this work has important implications for rehabilitation after SCI. “The dorsolateral corticospinal tract in adult mice comprises around 400 nerve cells, compared to the 17,000 neurons that were injured, so it may be possible to see significant recovery by targeting the regeneration of a relatively small number of cells,” he said.

It’s important to keep in mind that this work has only been done so far on rodent models and researchers are unsure how clinically relevant the horizontal ladder task is. However, the knowledge that having even a few uninjured neurons can lead to recovery of some movement can now inform research into more effective rehabilitation strategies for people with SCI.

“This research shows us that we should focus on uninjured neurons as a target for therapy,” said Hilton. “Of course more work is needed, but as most SCI in humans are incomplete, and our work shows—in rodents at least—that even very small spared tracts can mediate recovery, this may be a promising target for therapeutic intervention in humans.”