Cardiovascular disease is the main cause of death in people with spinal cord injury (SCI), who develop the chronic disease at younger ages and greater rates than the able-bodied population.

This is a surprising fact — both for people who suffer a spinal cord injury, as well as their health caregivers, but a prestigious research grant promises to increase understanding and create healthier outcomes in this area. ICORD spinal cord research, Dr. Andrei Krassioukov has been awarded $1.9 million from the Canadian Institutes of Health Research to investigate how exercise and education can improve the cardiovascular health of Canadians living with SCI.  Dr. Krassioukov, who is an investigator with the ICORD spinal cord injury program at Vancouver Coastal Health Research Institute and the University of British Columbia as well as a physician at GF Strong Rehabilitation Centre and professor of Physical Medicine and Rehabilitation at UBC, will lead a team of 20 scientists, clinicians, and health care advocates from across both Canada and the United States to investigate the best ways to reduce chronic disease and improve cardiovascular health. 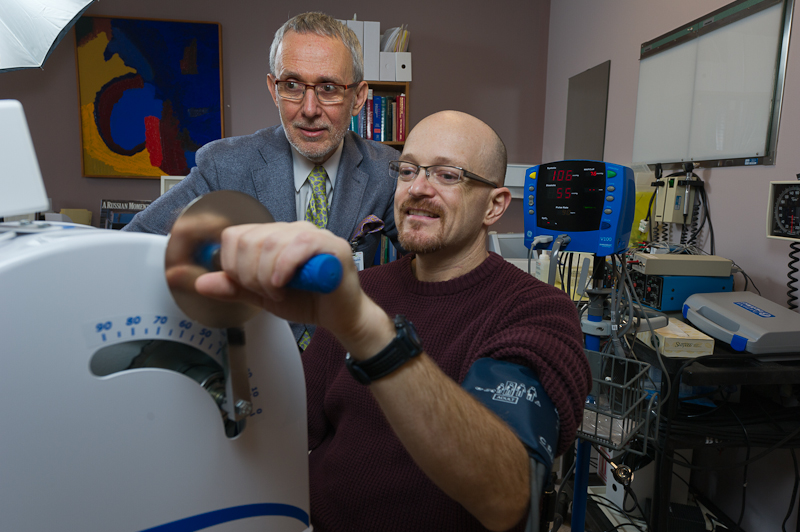 “Twenty-years ago, I applied for my first grant to study the effect of spinal cord injury on the cardiovascular system, but it was widely believed that people with SCI didn’t need to worry about cardiovascular disease, and that the research community should focus on curing paralysis. While that is still the end goal, we now know how severe and life-threatening cardiovascular issues can be,” says Dr. Krassioukov. “With this grant we will study different types of exercise interventions as well as translating findings in such a way that we can educate health care providers on the specific cardiovascular problems that are associated with SCI. The results will be improved treatment for SCI as well as a reduction in the financial burden of care.”

One area the research team will be looking at is autonomic dysreflexia, which is a drastic increase in blood pressure striking those with cervical and upper thoracic injuries. If left untreated, it can lead to bleeding in the brain and or death.

This unstable blood pressure control is a concern to the general SCI population, but especially to athletes with SCI. Dr. Krassioukov led a major study during the 2010 Vancouver Paralympic games, and has received funding from the Craig Neilsen Foundation to run a cardiovascular health autonomic clinic in London’s Olympic Village.

Dr. Krassioukov believes there needs to be much greater awareness of this issue. “With Paralympic athletes, we have two problems in this area,” he says. “One is those who don’t know this is a risk and need crucial, practical information. The other is athletes who are aware of autonomic blood pressure spikes and will actually attempt to use it as a competitive advantage, which is extremely risky.”

The clinic in London will provide evidence-based clinical knowledge and crucial practical information on unstable arterial blood pressure control among athletes with SCI to Paralympians and their coaches at the 2012 Summer Games, and build on the research in this area.

“Understanding cardiovascular risks and the effects of exercise training in people with SCI has become vitally important,” said Dr. Jean Rouleau, Scientific Director of the CIHR Institute of Circulatory and Respiratory Health.  “This research will increase our understanding of how to design exercise programs specific to the individual, as we know that two people with the exact same spinal cord injury can respond quite differently to exercise intervention.”

Read more about this issue in Metro News.