What exactly is neuropathic pain, and why do we feel it? ICORD PI Dr. John Kramer recently acquired the first laser for pain research in BC, and he and his team are using it to answer some fundamental questions about neuropathic pain.

Neuropathic pain is estimated to affect at least half of people with SCI, and it can originate all over the body, including in areas that no longer have feeling. There are currently two standard tools to test for neuropathic pain: contact heat evoked potentials (CHEPs), and lasers. Although both methods are in widespread use, few studies have compared them side-by-side. Dr. Kramer’s research team is investigating both methods and recording brain activity with EEG during pain perception. “In essence, we’re trying to more accurately map what’s going on in the brain during neuropathic pain,” co-op student Carson Berry explained. 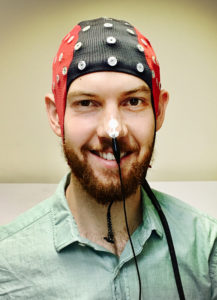 Currently, the Kramer Lab is working with able-bodied participants. Researchers apply capsaicin (the substance which gives chili peppers their kick) to a participant’s skin, then compares perceptions of pain using CHEPs and the laser. Capsaicin is widely used in pain research because it temporarily induces primary hyperalgesia, or increased sensitivity to pain, which mirrors symptoms frequently reported by people with neuropathic pain. “Capsaicin makes the skin more sensitive to heat than usual—think of it as a sunburn,” postdoctoral fellow Dr. Catherine Jutzeler said. Once capsaicin has been applied, painful stimuli are applied to the skin using CHEPs or the laser, and brain activity is recorded.

One key difference between CHEPs and laser-evoked pain is that the brain responds differently to them in the presence of capsaicin, and there is no currently no explanation for why that is. “There are two types of pain-detecting nerve fibres, called A-delta and B-delta fibres, that feed into the spinal cord. It’s possible that CHEPs can’t distinguish between the two, but the laser can. If this is true, we can use the laser to specifically target the A-delta fibres and form a map of them that we correlate with signals in the brain,” said Carson. This brain map will give researchers a better understanding of what happens in the brain during neuropathic pain, facilitating the development of more effective therapies. “In order to treat neuropathic pain, we first have to understand what it is, and this study should help us do that.”

If you’d like to help the Kramer Lab with this study, check out the study listing here.