In honour of the ongoing fundraising for ICORD done by the students at W.L. McLeod Elementary School in Vanderhoof, BC, ICORD is renaming a travel and research prize for Masters students the W.L. McLeod Trainee Award. 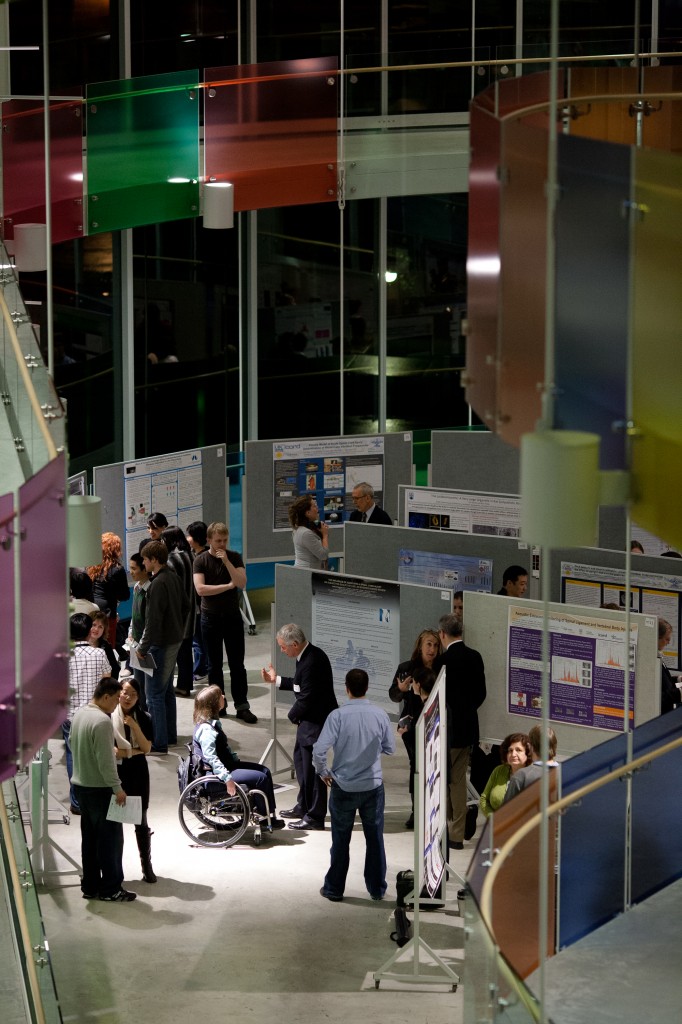 The poster session of the 2012 ICORD Annual Research Meeting.

Each year at our Annual Research Meeting, ICORD Postdoctoral Fellows, PhD and Masters students present posters describing their work, and compete for three awards for excellence in research. These trainees work in the labs or research groups of ICORD Faculty members, and are working in many different areas of SCI research, from discovery science to rehabilitation research. ICORD trainees are involved in all aspects of the research, from designing studies and performing experiments to documenting and presenting their results. They are guided in their work by ICORD researchers who are faculty members at UBC / Vancouver Coastal Health, Simon Fraser University and the University of Victoria. The awards allow the trainees to travel to conferences to present their research and get feedback from national and international experts in spinal cord injury.

The Aaron Moser Award goes to the best poster presented by an ICORD trainee at the Doctoral Student level. This award is named for Aaron Moser. In 1988, while playing hockey for the Nanaimo Clippers, Aaron was checked from behind into the boards and suffered a broken neck, severing his spinal cord and leaving him with no movement from the neck down. After his injury, his teammates and friends set up a trust fund to raise money for the equipment, supplies, renovations, and other expenses he would have during his rehabilitation. The Aaron Moser Spinal Cord Injury Foundation was started with the remaining funds. The sole purpose of this foundation is to raise money toward spinal cord research and, ultimately, to find a cure for paralysis.

The Gordon Hiebert Award is presented for the best poster by an ICORD trainee at the Postdoctoral Fellow or Resident level. This award is named in memory of former ICORD trainee, Dr Gordon Hiebert. Gord came to ICORD in 1996 for his postdoctoral training, joining the labs of Drs. Wolfram Tetzlaff and John Steeves, later moving to Saskatoon in 2001 and later Edmonton to continue his research. On May 26, 2004, SCI research lost a friend and colleague when Gord passed away at the age of 36 following a battle with cancer. Along with his significant scientific contributions, Gord will be remembered as a friend to all who knew him.