What do science and comic book superheroes have in common? Quite a lot, says ICORD Principal Investigator Dr. Paul Zehr.

Dr. Zehr has been using comic book superheroes as a platform for discussing science since the release of his first book, Becoming Batman: The Possibility of a Superhero, in 2008. In his most recent book, Chasing Captain America: How Advances in Science, Engineering, and Biotechnology Will Produce a Superhuman, Dr. Zehr completed a trilogy on the subject, exploring whether a combination of current technologies could be used to turn an ordinary person into a superhero. He recently sat down for a Q+A to describe his lifelong interest in science, superheroes, and science communication.

Q: How did you first get interested in comic books? Were there any childhood favourites that inspired your books?

A: Comic books were my gateway drug into reading. When I was a kid, my mom would grab a half-dozen or so off the rack and bring them home for me each week back when they still sold them at grocery stores. There wasn’t one specific comic book that I liked best—it was more the idea of using comics for creatively thinking and expressing yourself.

Q: What sparked your interest in science communication? 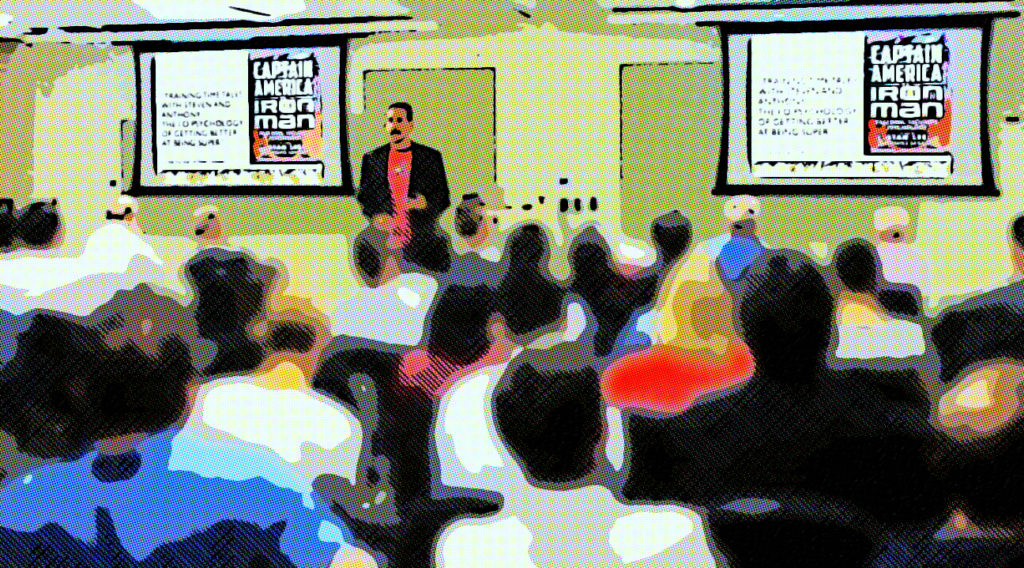 A: I’d always had it in the back of my head, even as far back as when I was in university. The tipping point for me was at a conference in the mid-2000s. I flipped on the TV in my hotel room before bed, and one of these ridiculous infomercials for some miracle health product came on. I remember thinking to myself, ‘Why would anyone buy this? This is garbage,’ but the people watching didn’t know the science behind it, and I thought, ‘I can help fix this.’ By writing books about science using comic book superheroes, I can reach people who might never otherwise learn about it.

Q: What are some strategies that you would recommend for researchers starting out in science communication?

A: I always tell people to shape their message to suit their audience. I think there’s this perceived barrier between scientists and people in the community, but I’ve found that people are really curious about science and want to learn more about it as long as it’s not being shoved at them. I think there’s reluctance among scientists to use pop culture, because they see it as something completely separate from science, but I urge them to think of it as a tool. Pop culture is popular for a reason: people remember stories, and we can use science storytelling to make science more accessible to people. The means of communicating the science is popular and can make use of fictional characters, but the science itself is still real.

A good example of this is when I went to give a science talk to several hundred Grade 3-5 students. The principal and some of the teachers were almost sweating beforehand—they asked how long my talk was going to be, and apologized in advance that the kids might get restless. But you know what? I gave my talk on Batman, and the kids loved it. I asked them questions, like ‘What would happen to Batman’s brain in this situation? How are his muscles working together?’ I went through the anatomy of bones, from the level of the skeleton down to individual osteons, and they were on the edge of their seats, because I was talking about Batman’s bones. As long you consider what your audience will find interesting, and choose your tools to fit your audience, you can communicate science at any level.

Q: What’s next for you as an author?

A: Now that I’ve finished the superhero trilogy, I’m thinking of returning to the young adult theme that I explored in Project Superhero, but with a twist: last time, there was a female protagonist, and it was aimed at readers 10-15 years old, so I plan to try a male protagonist and the 14-17 age group, which I haven’t done before. There’ll be some of the same characters in Project Superhero (older now!) and science of human enhancement as in Chasing Captain America—it’ll be sort of a cross between Chasing Captain America, The Diary of Wimpy Kid, and The Lightning Thief.

Q: Ultimately, what is your goal as a scientist and science communicator?

A: When I think about my value to the world, everything I do is centred on empowerment through knowledge, from my specialized research to my science communication and teaching martial arts. I first got into science because I wanted to use it to help people, and when I manage to use science to positively influence others, I get this feeling that I’ve done something well and for a good reason, and it resonates on so many different levels. In the end, they say that knowledge is power. If you have a lot of knowledge, then you have a lot of power, and your superpower is to share your knowledge in the most creative way possible to connect with the largest number of people.